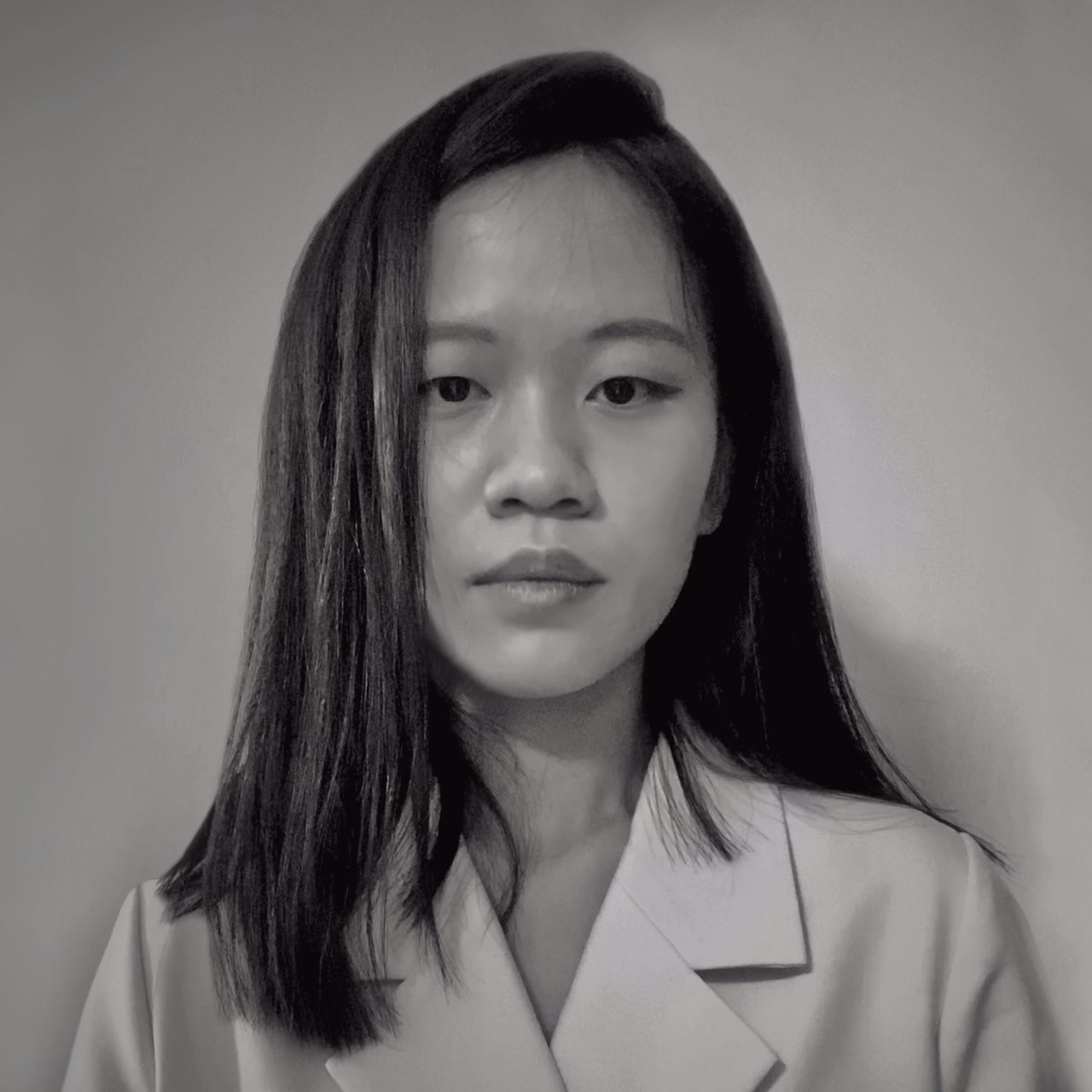 We interviewed Tan Wei, winner of the 10th France + Singapore Photographic Arts Award (FSPAA) to discover her inspirations and process behind her solo exhibition, 'Indéfiniment'.

Scroll down for more...

How do you think the pandemic has changed how artists work? You put [the exhibit] on hold because the last time you could do photo traveling at sea was -
TAN: In February about two years back, before the pandemic started. I wanted it to sort of be subjective: [the] in-between of arrival and departures of a place that’s supposed to be a second home; to me, at least. Indonesia was supposed to be [a second home] for my family. The second work that you can see in the smaller room was developed from the comfort of home, literally, and I think that’s how artists have to shift their perspective when the works that they are currently doing don’t quite pan out the way that they want.

So, Singapore is your first home then, in that way?

TAN: For me. My parents met in Singapore, and they had all of us [me and my siblings] here, so it’s where I would call home for the best part of my life. But yeah, it’s a sort of place that you don’t feel a 100% sense of belonging. I always grew up feeling kind of alienated; I didn’t feel like I entirely belong in this place. And then I sort of grew older and learnt to see Singapore as this melting pot of different cultures and as an international hub, where everyone meets.
So, it was that feeling of belonging and not belonging that made you choose the ocean as the main focus point or was there anything else?
TAN: I think that a large part that influenced me into using the ocean as the subject matter of these landscape is also because of the fact that I would self-profess to be an existentialist. So, to me, I like to think about how the universe came about; how humans came from being planktonic organisms that swam amongst the sea before we took a mind of our own, and mutated, and became homosapiens as we are today. So, I think when I talk about human beings in that planktonic state and us as we are today, there’s this sort of familiarity for us with the sea, that’s supposed to a holding ground for all life forms, and yet if we were to be out at sea today with the storms and deep sea levels, we could no longer thrive in that environment anymore even though it has once sustained and nurtured us. There was this line in a Haruki Murakami book, where he wrote, ‘When you’re with people for too long, you want to be out at sea, and when you’re out at sea for too long, you just want to be with people again’. And I think it’s that sense of sentiment that makes me think of the sea as a befitting spot for the series to unfold.
The other big thing for this exhibit is the interactive piece. Where did you get the school desk from?

TAN: <laughing> I got it online.

I was wondering where exactly you’d managed to get it. But that’s one of the big attractions for this piece; that you’ve got a weird old-fashioned object, that you have to have gloves on to handle it, and the photography plates are simultaneously old and new. Did you have any intentions when you put an interactive piece in this or not?
TAN: I had two ideas, and one of the ideas was to create a form of sculptural and video installation accompanied by sound. But during the pandemic I had to stop production on that, because I don’t have access to a workshop. But with that installation piece, the intention of it was to bring the audience into the same environment [where the images were created], to listen to the water, and the sound of the sea. And with that in mind, I wanted to create something somewhat immersive, so the stereoscope viewer here is meant to create a 3D perspective of the scene in front of you, so that’s how I got to that idea. 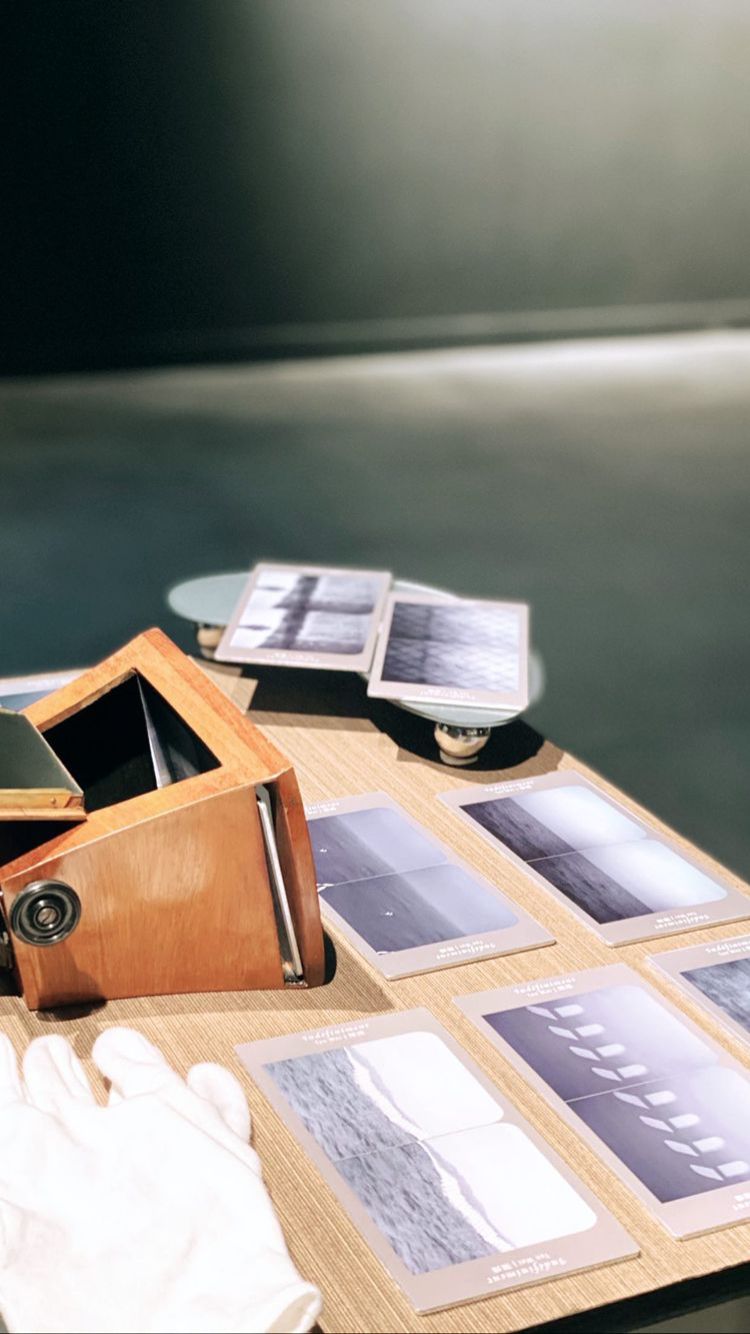 Was there any reason why you wanted a school chair [and desk] in particular?

TAN: I couldn’t quite put a finger on it. Because I think it also creates this very lonely, small, little table to contemplate the worlds that the images are showing on the walls. I thought of it as the perfect setting for the audience to take in the sights.
Because the thing is that I never went to a school that had those desks, and I only ever saw them in TV shows. I just had a straight table, and I’d just put my bag below; it’s constantly something you can move in, you don’t have a very set place to study. That kind of table, it’s something very personal, it’s your own place to have in amongst a sea of other tables and chairs, was it something like that?
TAN: I like your interpretation <laughs>

For Equatorial Grey, you mentioned [the photographs are taken in] part of your living space, and I was wondering – were there any parts of your living spaces that you wanted to photograph and any that you didn’t want to photograph and why?
TAN: I think I have to go back to what René Magritte said: everything that you see is also hiding everything else that you don’t see. So, I think, for photographing a personal space, there’s definitely a limit and threshold on how much you want to show, how much you don’t. I think that’s probably a series that represents how much I’d like to show.
Where were most of the photographs taken from?
TAN: They were taken right from my bedroom window.
What techniques did you use when you took these photographs? Were there any in particular that you tried to aim for?
TAN: They might seem like they are digitally put together, however, all the photographs here are actually achieved manually: so, I create a scene set, and then photograph it along with the sea-scapes or with the butterflies in the back, as you can see. It [makes] the whole process a very time consuming and meticulous method. It’s sort of a way to empty your mind and through this meditative process, the whole process of making in turn becomes an equally contemplative process so as to allow for the lingering bits to come through.
You’ve got a few animals appearing in your works; you’ve got the koi fish, you’ve got the butterfly, you’ve got the swallow. Do you want more animals in your work or not?
TAN: I think I do have a fascination with them in general. But I think it’s also because I see examples of human traits [exemplified] through these animals that made me see them as a subject or character in my artwork.
Were there any French artists or photographers, or any French inspirations that you tried to draw on for your art?
TAN: I think that's the title of the show laughs. But I think [on the leaflets] you have the French title, you also see the Chinese text, and the English text appearing together. I like this idea of words jumping over and leaping to another dimension, and then there’s this sort of multiverse dimension that I’d imagine being constructed through the different layers of text.
What does Indéfiniment mean?

TAN: Indéfiniment could be interpreted in two ways: One, which is of indefinite resolution, and secondly, of indeterminate time.
How did you end up choosing that word to be the word of the exhibition?
TAN: I think I saw it as a comprehensive understanding of the works presented here in that, there’s a pervasive sense of longing and an inability to put a concrete resolution to the works, or at least in the narrative within the works, which kind of led me to the title—Indéfiniment.
The words in Equatorial Grey – where do they come from?
TAN: The words are off a poem I wrote. I just wanted there [In Equatorial Grey] to have an extract of a text that I had written inside.
It’s mentioned that it’s talking about dreams – is that something else that you draw upon a lot for your work?

TAN: It’s something I tap into a lot for my work because in a certain sense, I consider a lot of my work to be surrealistic, and there’s always a dimension of certain psychoanalytical themes in my work, and all this use of symbols and signs. There’s definitely that dimension unfolding in my work, so I think in a way, if it’s representing a dream; it’s kind of befitting, because things unfold in dreams in ways that it can’t in real life. And it becomes a perfect dimension for us to pick apart our neuroses.

Explore the subconscious realm of dreams in Tan Wei's Solo Exhibition, 'Indéfiniment', in which we go on a journey to otherworldly spaces straddling the line between dystopia and utopia.